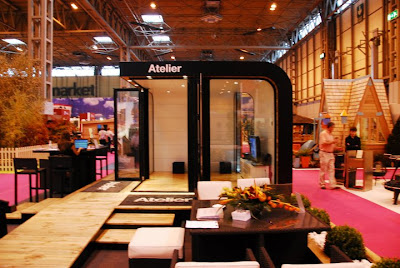 Among the garden office exhibitors at Grand Designs Live last weekend was Atelier Garden Studios and they have put up a selection of photos of their stand on their Facebook page. Above is the new design they launched at the show and here's what they say about their experience:

"The new garden studio structure for our stand was build in our factory and transported down to Birmingham on a hiab lorry as a completed studio. It was then lifted into place at the NEC forming the main componant for our stand. Our team then built a large decking area surrounding the studio which included two seating areas and an apropos model. The stand was made up of aluminium, glass and timber and decorated with furniture from Ocean home and garden and plants and flowers from Barkers the Florist.. Our structure from the show will be donated to Birmingham Children's Hospital NHS Foundation Trust later on next year.

Wednesday posts are sponsored by The Stable Company®, the UK's premier supplier of garden offices and garden rooms. Click here.
Posted by Alex Johnson at 9:53 AM