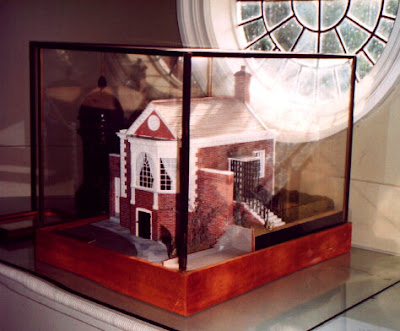 Writer Henry James (The Ambassadors, The Turn of the Screw) wrote in a rather splendid garden room, sadly destroyed in a World War II air raid in his home at Lamb House, Rye, a loss which James Lees-Milne lamented in his famous diaries. There's a particularly nice little site dedicated entirely to it (and the work of EF Benson, author of the Mapp and Lucia stories, who lived in Lamb House after James: the photo above is from that site). It is now owned by the National Trust who decided not to rebuild the garden house although they did put up a special plaque and small wall indicating its position.

Here's what H. Montgomery Hyde says about it in his work The Story of Lamb House:

The Garden Room, originally known as the Banqueting Room and used for formal entertaining, was built by James Lamb, probably in 1743, the same year as the Town Hall was rebuilt, and under the supervision of the same architect... The entrance was from the garden by a flight of seven steps flanked by iron railings at right angles to the French Window which opens on to the garden from the Morning Room of the main house. The small door underneath the bow-window led to a cellar which in Henry James's time was used for keeping the hand-cart with which Burgess Noakes would convey guests' luggage between the house and the railway station. It was in this cellar that the German bomb exploded in 1940.