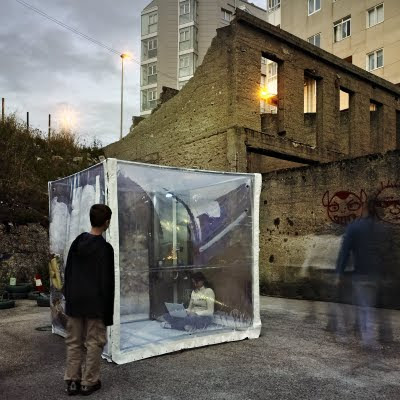 From Patricia Muñiz and Luciano G. Alfaya of Studio MMASA and architect-artist Cipriano Chas comes the remarkable buBbLe which they describe as "an independent, nomadic, flexible dwelling mechanism that allows its occupants to give an answer to different time situations". The basic 2m cube buBbLe - made out of aluminium and transparent plastic - is designed for two days habitation but a more bespoke one allows longer shedworkingesque possibilities. Here's what they say about it:

"buBbLe tries to advocate a space and a time for non-permanent dwellings. We believe it is possible to create contemporary residential units that penetrate the city’s interstitial spaces. These units would thus complete the city’s functioning and allow for the newly arrived, or displaced people in general, to gradually settle in the city. Semi-regulated spaces that, accepting the transience of new residents, alter their character slightly and contribute to social inclusion."

Via Judit Bellostes
Posted by Alex Johnson at 10:02 AM