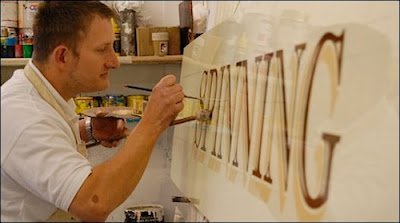 Traditional signwriter Wayne Osborne paints signs (hanging signs, shop fascias, company vehicles, exterior lettering, gold leaf, honours boards, and even gypsy caravans) by hand in Midhurst, West Sussex, where he set up his business from a shed in 1994. There are plenty of examples of his work on the site as well as details of the courses he runs on signwriting. You can read a nice interview with Wayne on the BBC site. Here's a snippet:

Having left school at 16, Mr Osborne's own business was set up in the shadow of the recession of the early 1990s and was built on a childhood fascination for signs and packaging. "It was not what was in the box, it was what was on the box that interested me," he says, dressed in a paint splattered apron. Initially he had work painting old steam engines. His own business started with painting pub chalk boards, but now the internet has revolutionised his research and his ability to advertise his work.

Wednesday posts are sponsored by The Stable Company®, the UK's premier supplier of garden offices and garden rooms. Click here.
Posted by Alex Johnson at 11:05 AM