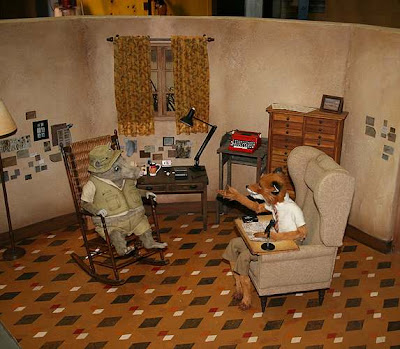 Many of you will have seen Wes Anderson's recent stop-motion version of Roald Dahl's story Fantastic Mr Fox. Empire has a very nice look at the creation of the sets on their online site and pictured above is Mr Fox chatting to possum (?) Kylie. "We took photos of Roald's old writing hut and literally recreated it, even down to the notes on the wall," producer Allison Abbate told Empire.

Thursday posts are sponsored by Atelier garden studios which are sustainable, stylish, flexible, functional and future proofed
Posted by Alex Johnson at 12:10 PM