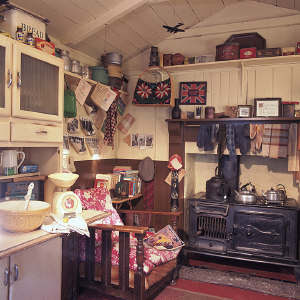 Coal miners might not seem the most likely of workers to enjoy the delights of shedworking but pictured above is a shed interior at a Rhyd-y-car house at the Museum of Welsh Life, furnished as it would have been in 1955. Here's what they say about it:


"Sheds such as these were typical of the area and were used as a living- and work-room allowing the room in the house to be kept as best. Most of the older men were still employed as coal-miners, but young couples, as envisaged here, were beginning to work in factories such as Hoover."

Monday posts are sponsored by garden2office, the Swedish garden office specialists. Click here for more details.
Posted by Alex Johnson at 9:52 AM