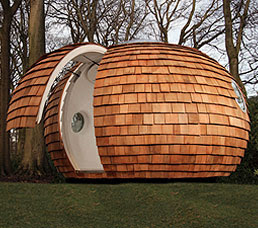 Journalist and broadcaster Piers Morgan is about to become a shedworker. He announced his intention on the breakfast show Good Morning Britain this week and said he was looking forward to having his own dedicated garden office where he could write his columns and books. It's not clear exactly which model, but it comes from the Archipod stable which we have featured several times before on Shedworking. Planning permission is ongoing but it looks like it's going to happen.