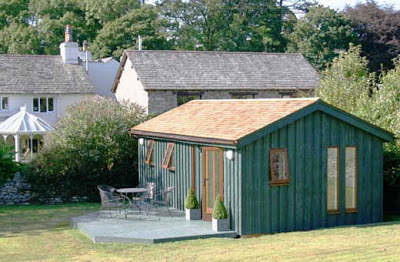 There's an growing buzz in the UK about the importance of small builds, helped recently by some high profile television series (and if you're in the USA, Tiny House Blog has details of a very interesting conference next Monday about the advantages of 'living small'). But now one housebuilder has coined the intriguing phrase 'Generation Annexe' to describe the growing importance of shedlike buildings in the property market.

Jonathan Cranley, Sales and Marketing Director at Millgate, points to a recent poll from insurers Aviva that suggests almost 36 million people in the UK have experienced living as adults in the same home as another generation of their family. "Almost 20 per cent of intergenerational living is due to families welcoming the older generation into their homes," says Louise Colley, Head of Protection Sales and Marketing at Aviva. "With a rapidly ageing population, this is likely to become more common in the future and families may need to take this into consideration when purchasing and renovating their properties."

Cranley argues that with the future needs of our parents, children and grandchildren in mind, properties with annexes could be the solution. "Properties with annexes within the grounds of a home, despite their growing popularity, are not easy to come by," he says. "In family friendly Buckinghamshire, for example, Zoopla data reveals that less than three per cent of properties afford annexe accommodation.

"Millgate homes frequently feature annexes for a variety of reasons, such as office space. Paying a rent to run a small business is a very unnecessary overhead for many so what better than to have your office at home yet tucked away from family life? Somewhere you can shut the door and walk away from at night. The 45 sqm of annexe space at our Hambledon House in Bourne End is plenty big enough to accommodate you and a business partner."

Of course he would say that as he's marketing a property (quite an expensive five bedroom one - this is a detached annexe with its own entrance, kitchen, bedroom and bathroom he's discussing), but its interesting to see that the advantages of a separate small building in the back garden are now starting to be pushed by major property companies.