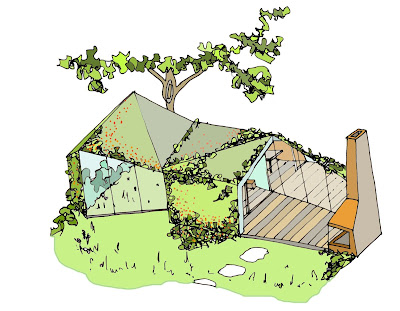 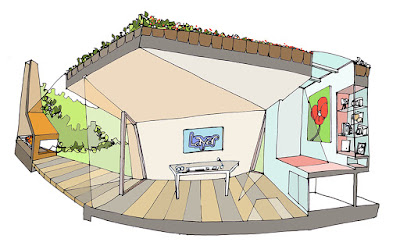 A spectacular shedlike atmosphere in the Watergraafsmeer district of Amsterdam, designed by cc-studio for Maarten - who as director of the augmentedreality start-up company Layar often works in the garden office - and Lori Lens-FitzGerald in Watergraafsmee. Here's what cc-studio say about it:


By placing mirrored planes the visual depth of the garden was enhanced to look deeper. Also the geometry of the volume was specially tailored to play with the perspective lines and to have no vertical surfaces parallel to the house but at an angle to have a more continuous flow.

It has a lovely sedum roof on the angular roof, built to avoid a box shape, and windows are half-hidden from direct sight (which is good as it is also used as a guest room as well as a garden office). cc-studio say that the vapour permeable cellulose insulation and gypsum plastered walls "create within the critically small space an agreeable indoor climate temperature and healthy air".