I was asked the following question on the Twitter yesterday so put out a call for help for anybody working in partially underground garden offices...

@shedworking Hey, I'm considering a garden office of some kind but looking to bury it in the ground so it's almost unnoticeable from above. 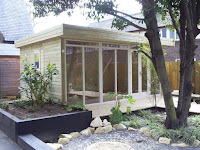