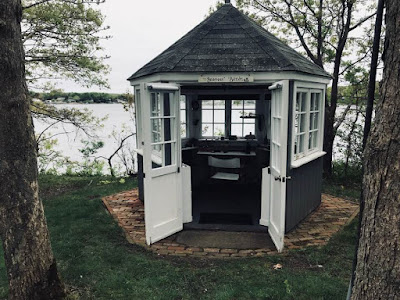 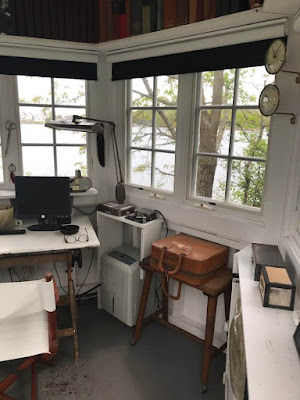 In a 1958 letter to his friend and agent Elizabeth Otis, American novelist John Steinbeck outlined his plans for building what he described as his “little lighthouse”. “It will be off limits to everyone,” he told her. “One of its main features will be an imposing padlock on the door.” Steinbeck’s writing hut on Long Island, New York, was so dear to him that he actually gave it a name, Joyous Garde (he even handmade a sign for it and stuck it above the door outside).

Named for Sir Lancelot's castle, the hexagonal structure at Sag Harbor was inspired by Mark Twain's own garden office and enjoyed marvellous views over the cove near Bluff Point. The attractive hut with windows in every wall was built by Steinbeck himelf and he worked in a director's chair inside which he labelled 'Siege Perilous' – indeed, Joyous Garde had only one chair so visitors had nowhere to sit down. A large desk took up much of the room allowing him to spread out papers and books and a bookshelf ran all round the room over the windows.

And now it's for sale. You can read up about the property at Sotheby's International,  who describe the writing hut  as "a gazebo-like structure with windows on all sides. It's a perfect place to watch the waterfront life." As well as Steinbeck's garden office, you get the two bedroom main house, a guest cottage, and large dock for boats. The whole thing is priced at $17,900,000. Yes, us too.