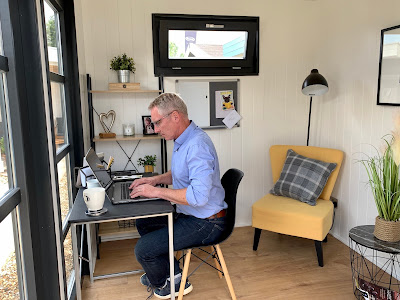 Shedworking HQ is being rather deluged by various bits of research and surveys and the like, and while we take most of them with a pinch of salt, taken as a whole they point towards increasing interest in homeworking in general and garden offices in particular.

The latest, from financial specialists HUB Financial Solutions, suggests that three-quarters of people in the UK are not planning to move as a result of lockdown effects and indeed a fifth are enjoying their home more than ever. However, just under half are expecting to carry on homeworking after lockdown is over and more than a third plan to make significant home layout alterations - for 12%, this includes building a garden office (and another 7% it means an extension). Overall, two thirds of those questioned believed that homes with specific home or garden offices would be particularly in demand.

There are similar results in a survey by estate agency Yopa, with additional figures suggesting 20% of people are less keen than before on living near busy towns or cities with a similar figure saying their employer has told them that working from home will be increasingly commonplace. A third said that if they were given this additional flexibility, they would consider moving house to another region (this figure rises among Londoners) and 40% are looking for larger properties.

Tuesday posts are sponsored by Garden Spaces, suppliers of contemporary garden buildings, offices, gyms and studios, many of which do not require planning
Posted by Alex Johnson at 9:57 AM