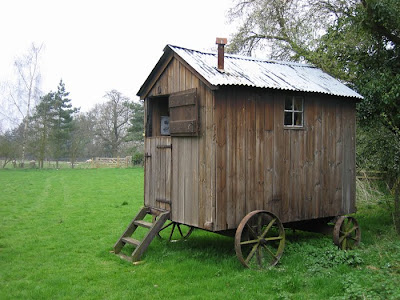 The fine people behind Historic Shepherdhuts ("A web based archive dedicated to recording Historic Shepherds Hut survivors and the forgotten part they once played in our Country's rich Agricultural past") are opening their doors to the public in September.

The 12th century St Botolphs church in Barford and their nearby 19th century Barford shepherd's hut which sits in their garden at Church lane will be taking part in the National Heritage Open Days open day organised in the Norwich area by Norwich Heritage & Economic Regeneration Trust. Their shepherd hut, which was rescued in a derelict state in 2003 and restored over a two year period was also voted number six in the Radio 4 'History of the World in 100 objects' (non-museum) section. A selection of photographs of some of the 350 huts they have recorded will be on display, as well as details of many of the local manufacturers in the region.

They are also hoping that Nancy Clemance from the Hut Living project will be attending over the weekend. Hut Living is a National Lottery supported oral history project run in conjunction with Bridport Museum which provides the opportunity for people with experience of using shepherds' huts to record their memories. For younger visitors there is a competition to build a model shepherd hut from a card template with a small prize for the best two awarded at the end of the weekend.

Monday posts are sponsored by garden2office, the Swedish garden office specialists. Click here for more details.
Posted by Alex Johnson at 11:36 AM