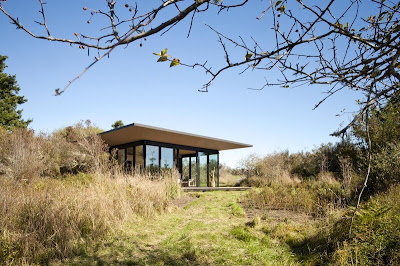 A rather splendid shedworking space (and rather a large one at 500 square feet) by architects Olson Kundig in the San Juan Islands, Washington State. They describe it as a private writer’s retreat and guest cottage and say: "The owners wanted a space that would feel totally connected to the natural landscape, allowing them to take full advantage of the mild climate, scenic views and the proximity to wildlife; at the same time, they needed the cabin to be easily secured when not in use." 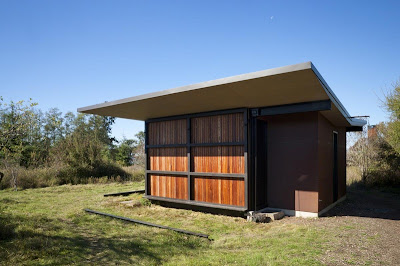 One of the many clever elements in the design - which also features a kitchenette, bathroom and area for hanging kayaks - is that the wooden decks can be winched up to act as shutters and close up the cabin when not in use (or if you just like to work in the dark). "Open," they write, "the shutter-decks are outdoor living space, connecting to the interior with 10 foot tall windows and sliding doors. The south shutter-deck can be opened independently of the other two, and an interior fireplace can rotate 180 degrees to be enjoyed from the exterior. The inverted roof forces water to drain to the rear of the cabin, eliminating a drip edge on the shutter-decks." 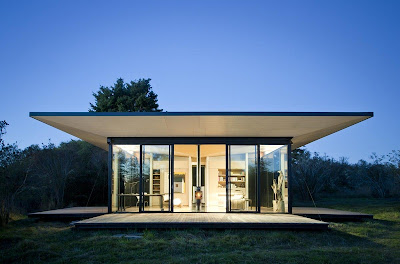 Monday posts are sponsored by garden2office, the Swedish garden office specialists. Click here for more details.
Posted by Alex Johnson at 9:10 AM