We're horribly late to the game with this look at the shedlike atmospheres on show at the recent Spring Malvern Show. Top of the pile was the two-storey Garden for Life (above) from Graduate Gardeners which won a Gold Medal and The Best in Show award: it featured a large A frame building for shedworking, relaxing and general family use and included lots of ecofriendly elements (solarpowered water feature, rainwater harvesting, fruit/veg patch, etc). 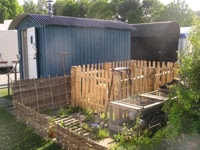 Thursday posts are sponsored by Atelier garden studios which are sustainable, stylish, flexible, functional and future proofed
Posted by Alex Johnson at 8:48 PM