Not one but TWO 'living' beach hut advent calendars! 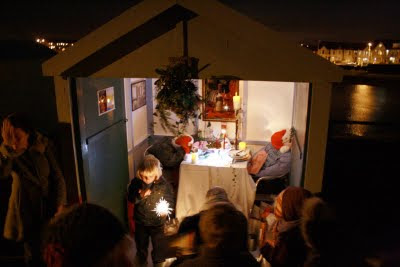 Last year we covered the marvellous beach hut advent calendar organised by Beyond in Brighton and Hove on a day by day basis. This year, I'm delighted that they're doing it again but I'm actually covering it for The Independent where you should go for a daily update, so we'll only be featuring them occasionally on Shedworking during advent (pictured above is the first hut which opened last night, number 431, owned by the Hotel du Vin in Brighton on the theme of 'God rest you merry gentlemen'). You can also follow the event on twitter @BeachHutAdvent. 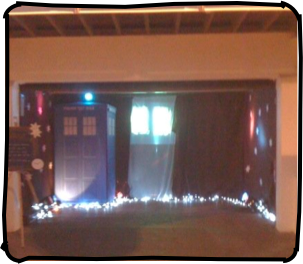 However, they are not alone. In Yorkshire (where the Shedworking staff grew up), Ben Norton, the Pioneer minister based at Emmanuel Church, Bridlington, is using the beach huts on the south side of Bridlington in a similar way (see photo above). Here's what he says:

Each night between 6pm and 7.00pm a different local group or artist will take a fresh look at the famous story on the lead up to Christmas day. The event will be a community event and has already generated an enormous amount of support, it will include local school choirs, music groups, actors, puppet shows, food and much much more. This will be a fantastic way to begin the festive season, fun for all ages and all FREE!

Wednesday's posts are sponsored by The Garden Room Company®, the UK's premier supplier of garden offices and garden rooms. Click here.
Posted by Alex Johnson at 10:00 AM