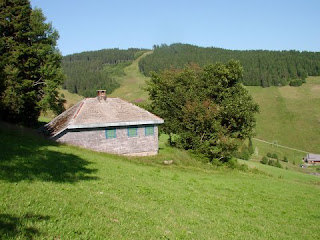 Anybody who doesn't believe that working in a garden office can be lifechanging (as well as lifeaffirming) should read the marvellous Heidegger's Hut by Adam Sharr. Sharr, a lecturer at the Welsh School of Architecture at Cardiff University, looks at how the German philosopher Martin Heidegger's hut near Todtnauberg in the Black Forest Mountians of Germany is absolutely central to his philosophy and writings. Built in the 1920s and measuring 6m x 7m (so it's not small), the book features plenty of original research including accounts of the hut by friends and family as well as lovely photographs of it, including Heidegger inside. Sharr suggests that the hut influenced some of Heidegger's key works including his essay 'Building Dwelling Thinking' and it was where he wrote much of his best work.

"Heidegger is found to have sustained simultaneously quite different relationships with his hut and house," writes Sharr. "The former appears closely aligned with his writings’ emphasis on the philosophical and experiential potential of human situation. The latter was organised around domestic life, broadly ‘aesthetic’ in sensibility. There are many ways to interpret Heidegger's hut - as the site of heroic confrontation between philosopher and existence; as the petit bourgeois escape of a misguided romantic; as a place overshadowed by fascism; or as an entirely unremarkable little building. Heidegger's Hut does not argue for any one reading, but guides readers toward their own possible interpretations of the importance of 'die Hütte'."

You can buy the book at Amazon here.
Posted by Alex Johnson at 9:51 AM