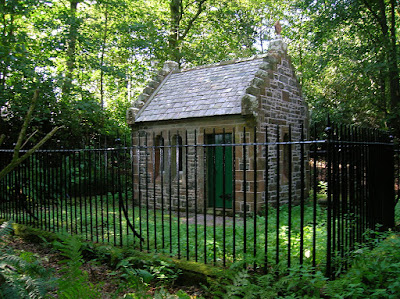 This is the rural folly inspired by anchorites cells turned stone summerhouse known as The Hermitage in Friars Carse, near Dumfries in Scotland. It was built by a Captain Robert Riddell who was a friend of the writer Robert Burns and who lent it to him as a garden office writing shed in which to write poetry. Among works Burns composed here was the eponymous 'Written In Friars Carse Hermitage' which begins:

Thou whom chance may hither lead,

Be thou clad in russet weed,

Be thou deckt in silken stole,

Grave these maxims on they soul.

Burns also used his 'diamond' pen to write on the window pane and liked the spot so much he occasionally overnighted here. After Burns fell out with Riddell (probably over something he said about Riddell's wife during one of their drinking sessions in the hermitage), the building fell into disrepair. Below is what it looked like in 1882, half a dozen years after some restoration work. It was further restored in 2009, although there is some debate about how original the building is and its first location. 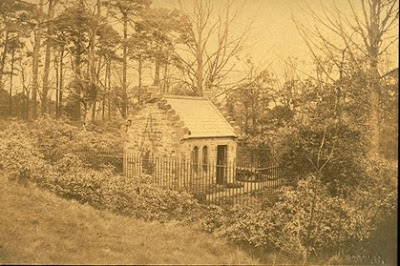 And in the video below you can see inside the hermitage.