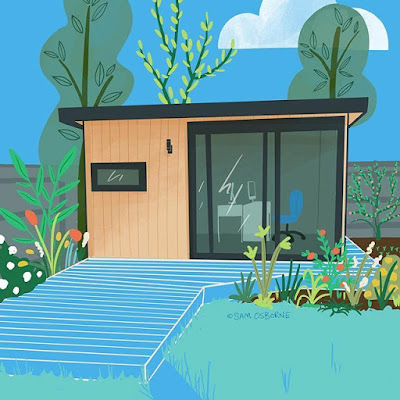 Here is illustrator and graphic designer Sam Osborne's own take on her 3m x 4m garden studio, built for her by Green Retreats. Sam has also written an excellent blog post about the build in which she looks at everything from researching suppliers, through laying foundations, to the actual build. Here's a snippet:


The garden hadn’t been looked after in over a year so there was a lot of old planting and overgrown shrubs that needed taming and a trellis that ran along the middle, behind which an old veggie plot lay unused. Our plan was to put the office in the back left-hand corner so most of that side of the garden needed to be pulled down and dug out, including the huge laurel bush behind the apple tree! Taking the laurel down was a bit beyond us so we called in some help from a local tree surgeon who chopped it all down and ground the stump out. Once that was all done we had to get rid of everything in the far corner of the garden including compost bins and concreted in fence posts. The area also needed to be level to within a few centimetres, this didn’t look too difficult but the ground was about half a metre out at various points and the roots of about a million shrubs had forced the soil up in strange places.