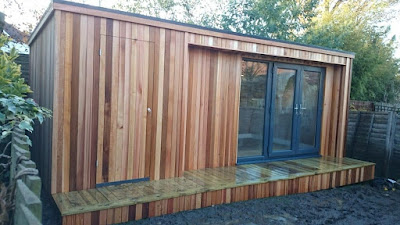 Shedworkers contribute arond £17 billion to the UK economy, according to new research from Starling Bank, and are four times less likely to be stressed than workers in 'traditional' offices. Back in 2010, Shedworking commissioned a similar report that estimated garden office-based businesses contributed around £6 billion to UK GDP.

The Starling report indicates more than 100,000 people run businesses from their garden offices, amounting to an annual revenue of £16.64 billion.

“We have a tradition of entrepreneurialism in the UK," said Anne Boden, chief executive and founder of Starling Bank, "and this, combined with the growing emphasis on a healthy work-life balance, has led to an explosion in people working from their homes. More people are opting for the freedom of being their own boss.”

The bank's research reveals that the average shedworker saved an average of £8,738 a year on rent, commuting costs, food expenses and other overheads. Other advantages mentioned by shedworkers questioned for the survey include avoiding the anxiety of commuting and being able to be with their pets.


Although they named the main advantage of shedworking is the peace and quiet of the working atmosphere, almost one in five host client or customer meetings in their garden office, for staff catch-ups or as a venue for new business pitches.

Monday posts are sponsored by garden2office, the Swedish garden office specialists. Click here for more details.
Posted by Alex Johnson at 9:33 AM