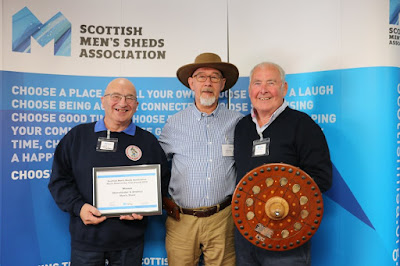 The Aberchirder branch was set up in 2016 by a group of seven friends and the shed was built the following year thanks to a land grant by Aberdeenshire Council - it features five cabins with toilets, kitchen, computer and social areas and was officially opened earlier this spring by the Lord Lieutenant of Banffshire Clare Russell.

A spokesman for the shed said: "The Shedders have worked with local schools, charities, businesses and residents to provide planters, fencing, garden seats, hanging baskets, firewood and chicken coups in addition to being the envy of the community with its homegrown fruit and veg." Aultbea Men’s Shed and Cromarty Firth Men’s Shed tied for the runner-up places and each receive a £250 cash prize and gift vouchers from Axminster Tools.

The event was held at the Carse of Gowrie Men’s Shed in Dundee and the trophy was designed by Derek Keiller, made using mahogany from a 100-year-old billiards table.