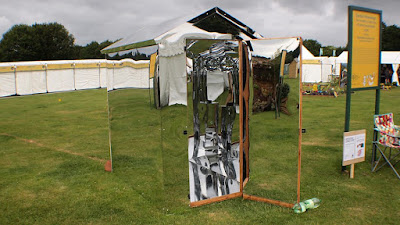 Last year, the Tatton Park Flower Show launched a new area called Garden Hideaways which proved very successful, so much so that they're repeating it again this year. It's the same idea, all about making the most of microarchitecture and they've picked out three promising concepts in particular for visitors to enjoy this week: Blooming Bridgewater, which explores the eponymous canal, and Outside-In and The Garden Library which both "focus on creating a retreat from the busy world outside". Pictures later in the week here on Shedworking but in the meantime pictured above is last year's winner of the section, The Invisibility Tardis Shed of Navel Contemplation, designed by Manchester School of Art. Below are some early tweets of the sheds.

The weird & wonderful #RHSTatton Garden Hideaways will show us how to transform our sheds! https://t.co/b1Ggn9Ilsr pic.twitter.com/Ouvpa9KfYt
— The RHS (@The_RHS) June 25, 2016

Tuesday posts are sponsored by Garden Spaces, suppliers of contemporary garden buildings, offices, gyms and studios, many of which do not require planning
Posted by Alex Johnson at 10:19 AM