my cool shed by Jane Field-Lewis 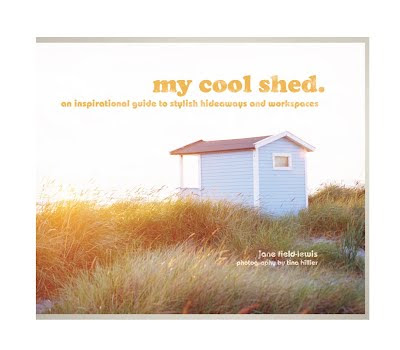 A decade is a long time in shed books. Ten years ago, Gordon Thorburn's hugely successful book 'Men And Sheds' was published featuring an entirely male lineup of shedworkers, hobbyists and Suffragen Bishops, photographed by Laura Forrester in black and white (one per double spread), mostly unsmiling, all from the UK, and in very traditional sheds. It helped - as did the previous year's launch of readersheds.co.uk - to kickstart renewed interest in shedlike atmospheres.

Ten years on, and with Sally Coulthard's Shed Chic book in between, we now have Jane Field-Lewis's new book 'my cool shed - an inspirational guide to stylish hideaways and workspaces'. The huge number of photographs are in full colour, the sheds are from all over the world, and the sheddies are both male and female. There's even a sourcebook at the end to help you get the look as well as gorgeous endpapers (see image below). The term 'shedworking' is now used without explanation. Much has changed.

my cool shed is split into several sections looking at artists, musicians, retreats, gardeners, writers, workspaces and time out. Many of the people featured are shedworkers (indeed plenty of the 35 garden offices and sheds featured have appeared on this blog or in the Shedworking book) which underlines again how much has changed in shed useage since 2002. Each entry also has a section called 'style notes' which allows Jane - who is a professional multi-disciplinary stylist - to talk through the look of each shed with her expert eye.

Jane writes nicely and there's no pretentious gobbledygook. It's a lively read and her hard work in tracking down some marvellous sheds (I particularly like French artist Richard Texier's studio at the end of a pier) has paid off in spades. But what really makes it stand out are the several hundred photographs by Tina Hillier. She has absolutely got to grips with each of the sheds, picking out intriguing details inside as well as atmospheric exterior shots - even if you're familiar with some of these sheds, there are so many new shots of them that you won't be disappointed.

You should certainly buy my cool shed (published by Pavilion in hardback at £14.99) - not only is Jane a decent person, this will definitely be the best book about sheds published this year.

Wednesday posts are sponsored by The Stable Company®, the UK's premier supplier of garden offices and garden rooms. Click here.
Posted by Alex Johnson at 11:55 AM