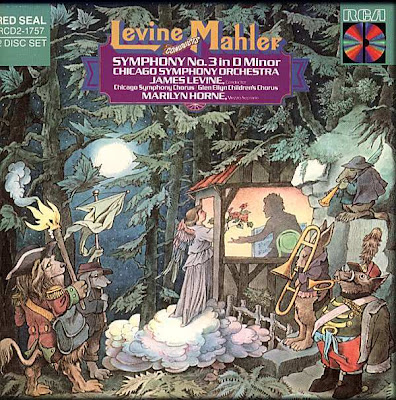 We're launching a week-long series of posts about Mahler's close relationship with shedworking with a look at more shedworking album cover art, this time Maurice Sendak's work for RCA on Mahler's Symphony No. 3 (released in 1976) which depicts the movement called “What Night Tells Me”.

In an excellent examination of the artwork on the Mahler Archives site, Teng-Leong Chew explains that it was done in pen-and-ink and tempera, at 14¼” X 14¼” an exact fit for the album sleeve. "In the days of LPs, the physical size of the recording medium meant that the LP cover sleeves themselves were often treated as an artist’s canvas," he writes, "on which beautiful works of art that “represented” the music (most likely in abstract form), or were inspired by it, could be rendered. The child-like nature of Mahler’s Third Symphony, especially the inner movements, which are laden with fantastic images such as angels, night animals, flowers, and cuckoos, set a perfect stage for Sendak."

Monday posts are sponsored by garden2office, the Swedish garden office specialists. Click here for more details.
Posted by Alex Johnson at 11:36 AM