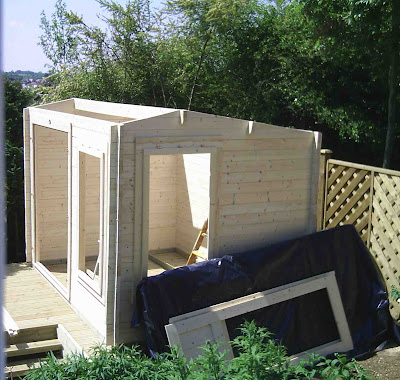 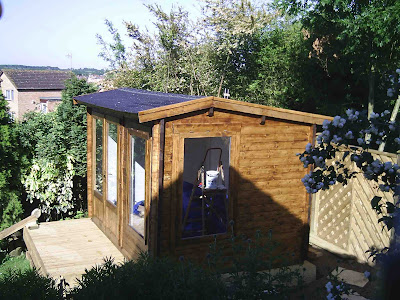 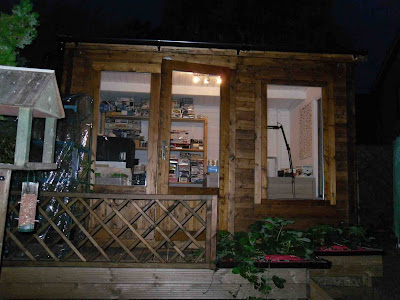 A guest post by Shedworking reader Patrick Wickham about how he built and now uses his garden office.

But as we live in a split-level house we would need to remove 5+ tons of earth to get down to the house footings. Four independent builders gave us quotes of around £40,000!(plans drawn up and planning permission obtained). So a change of plan was to remove the trees lining the edge of our garden, erect a fence and as the site slopes across the back of the house right to left would need a deck to build the cabin on, with the back of the deck at ground level.

On visiting the Dunster House factory/showsite at Bedford we chose a Carsare model log cabin sized at 3.5 X 2.5 metres manufactered to peak below the planning height limit and this was delivered about 6 weeks later. We (my wife and I) had all the walls up in 2 hours and the next morning put on the first layer of tounged and grooved roofing on. Then the weather changed, I rushed to our local B&Q and bought two 8 metre tarpaulins and carried on what work we could underneath.

Two weeks later the weather changed to dry so my wife and I took a week off work and completed the build adding insulation to both the roof and floor (plus a laminate floor in the oposite direction for extra strength) and the double glazed glass to the doors and windows and black shingles all as supplied by Dunster House. We are nearly two years down the line and we are thoroughly happy with the decision to build our cabin (all costs including site changes, build and electrical work adding up to around £4,000 just 10% of the original cost) and to get my model making off the dining room table after nearly 40 years!
---------------------------------------------------------------------------

Monday posts are sponsored by garden2office, the Swedish garden office specialists. Click here for more details.
Posted by Alex Johnson at 10:19 AM