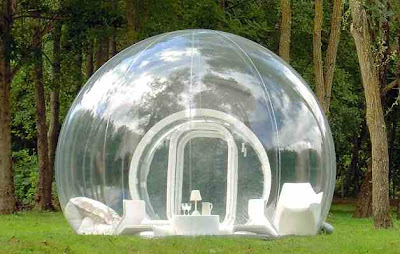 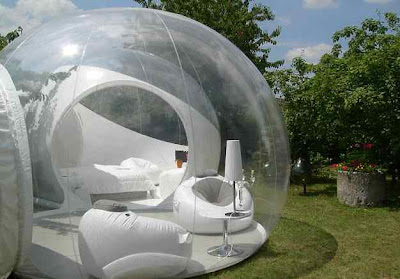 Bubbletree is technically a completely seethrough tent for campers who don't mind being rather exposed to the outside world but would work well for shedworkers who were also happy to have a different kind of garden office wall. Here's what the designer Pierre Stephane Dumas says about them:


"Bubble huts are like an ataraxics catalyst, a place apart where getting rest, breathing and standing back. Thanks to its geometry and its working principle, hosts can benefit from an amazing acoustic effect. Noises coming from the outside are reduced and noises coming from the inside echo towards the sphere´s hub. This echo drives people to speak quietly bringing about a feeling of appeasement favorable to have a nap."

The 4m diameter sphere which comes with a wooden floor keeps its pressurised bubble shape thanks to a silent blower/pump and filter which apparently also helps to avoid moisture problems and allows air renewal. You'll be relieved to know that the special plastic is reinforced with an anti-fire and an anti-ultraviolet rays agent.

There is also a treehouse version which is much less seethrough but still rather lovely.

And here they are in action...