The Shedworker's Bookshelf - The DIY Guide to Green & Living Roofs 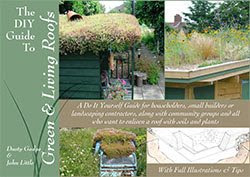 This is one for your virtual bookshelf as it's only available as a pdf (though I suppose you could print it out and bind it if you really wanted). Two of the UK's leading proponents of green roofs have teamed up to produce The DIY Guide to Green & Living Roofs, a guide aimed at individuals with a Do-It-Yourself inclination along with those having trouble persuading local contractors to take up the challenge of installing a green roof on their behalf.

Published by Dusty Gedge of Livingroofs.org and John Little of The Grass Roof Company, features details on how to convert existing sheds to take a green roof as well as instructions on how to build a small green roof from scratch. It is available in eBook formats at www.livingroofs.org/DIY_Guide_intro.html for £11.65.

"Over the last few years we have both been inundated with phone calls and emails from people keen to build their own green roofs or to convert their sheds and existing roofs to green roofs," says Dusty. "As enthusiasts it is difficult not to reply to emails and answer phone calls but we both struggle to keep up so we decided to write the guide to try and give people a starting point. Big green roofs on large developments are one thing but there is also a huge appetite out there at the micro level. This guide hopes to meet that appetite, not only in the UK but also in North America, Australia and throughout Europe."

"We also want to challenge the 'IKEA' approach to green roofs. You don’t have to go out and buy a system. You can source all the individual components yourself, hopefully locally, and create your own unique green roof. That is the second point of the guide. When I started out 10 years ago I just wanted to build green roofs. There was no information out there to help me so I had to learn through experience only. Every small building I have built has had a green roof installed and over 10 years you realize that it can be quite simple. At the end of the day Dusty and I just want to see more green roofs and we hope this guide helps add to what is already happening out there on the larger scale."

John and Dusty are also planning to run workshops based on the guide throughout the UK over the next year and hope to feature many of the projects stimulated by the guide on their websites.
Posted by Alex Johnson at 3:57 PM