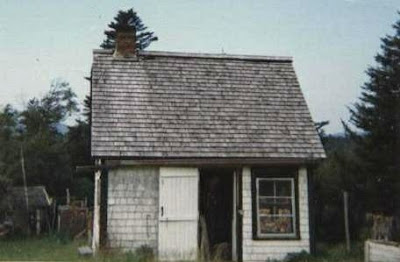 While maybe technically a house rather than a garden office, folk artist Maud Lewis' house is more than a piece of history, it is also an encouragement to those who want to live and work 'small'. Lewis (1903-1970) lived and worked in this one room house - which had a sleeping loft upstairs - built from spruce shingles. It measured just 3 X 4 metres. She and her husband Everett also had a number of sheds on the property including an uninsulated outhouse and from the mid-1960s Maud used a small tin trailer as a studio where she kept all her artists' materials and a fridge: without insulation it was fine in the summer but too chilly to work in during winter.

What makes the shedworking atmosphere particularly lovely is that while Lewis is known for her bright paintings, she also used her own house as a canvas (a little like the Bloomsbury Group's Charleston in England). Here, for example, is her door (photo by Battersby Family) 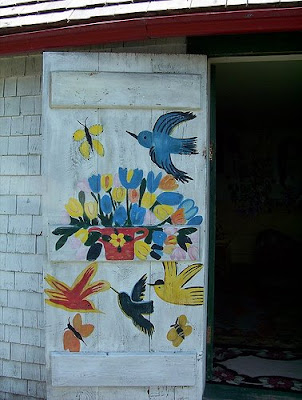 and an interior (photo by yumikid) 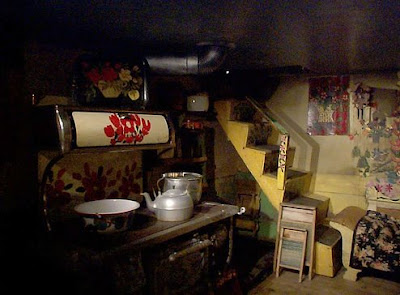 After her death Lewis' painted home started to deteriorate and the Maud Lewis Painted House Society was founded to save it: completely restored, it is now on permanent display at the Art Gallery of Nova Scotia. Shedworking reader Annie MacTavish, who suggested this post, says that a memorial to Maude was built on the original site of her painted house, near Digby, Nova Scotia: completed in metal, in both size and dimension it is identical to her small home.

Our Monday posts are sponsored by garden2office, the Swedish garden office
specialists.
Click here for more details.
Posted by Alex Johnson at 11:47 PM