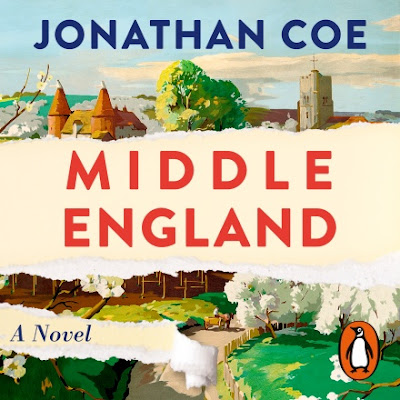 There was a spate of novels which featured sheds half a dozen years ago but sadly very few since. One recent example in which shedworking atmospheres feature is Middle England by Jonathan Coe. We asked John 'Shedman' Davies to review it for Shedworking:


“Genius. Loved it. Wonderful satire and some of the best shed sequences written in many a year!” That was my tweet after reading Middle England and I’m still of the same opinion about this marvellously humane, and far from one-sided take on the Brexit saga, the third in Coe’s series of novels about the Rotter family in Birmingham.

Nowhere is the satire more fun than in the scenes set in or around sheds. A garden centre features strongly as the setting of a kind of perverted Eden where you can take Aged P’s (as Wemmick refers to his father in Dicken’s Great Expectations) for tea. But it also used as the venue for meetings by one of Benjamin’s old school friends, now a publisher of local history books. He’s arranged to meet the author of ‘Postcards of old Droitwich and Feckenham’ to discuss its publication. The author thinks they should go and discuss things “somewhere less public,” and so begins a very funny peregrination to find a shed of a suitable size to host their meeting.

“At the rear of the Woodlands building, hidden from the car park, hidden from the main road, lay its most secret – but for many its most precious – enclave. For here were the sheds…structures designed to furnish the married Englishman with perhaps the thing he craved most of all: a place where he could escape his family without actually leaving home.”

It turns out the postcards book is just a pretext for a much darker project. As Benjamin says, ‘You never know what you’re going to find. Sometimes it’s good, sometimes it’s nasty, a lot of the time it’s as weird as hell. But that’s England for you. We’re stuck with it.’

A rich vein of satire emerges from David Cameron’s love of his shepherd’s hut: "Dave has become a very different person since resigning. Very humble. Contemplative. He realized that it was time for him to take some big decisions in his life.’ ‘Such as?’ ‘Well, buying a shed for instance.'"

But the apologist eventually turns on Cameron in a fierce diatribe: ‘Cameron?’ said Nigel, his face twisting. ‘What a twat. What a grade-one, first-class, copper-bottomed arsehole. Sitting in his fucking shed writing his memoirs. Look at the mess he’s left behind.’

Middle England is brilliantly funny, in turns acidly and gently satirical, and very, very perceptive. The Rotter family’s continuing grief over the Birmingham bombing by the IRA, forms a sobering backdrop to all the talk of backstop.

Wednesday posts are sponsored by Eurodita, the leader in serving smart dealers
Posted by Alex Johnson at 10:07 AM