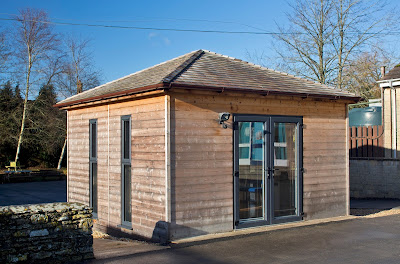 The new Strutt & Parker Housing Futures survey of around 2,000 people shows that the most desired garden feature is a walled garden. But just behind it is a garden office and similar shedlike structures.

With moving house becoming more expensive and people spending longer in homes between moves, there’s a feeling that homeowners want to create something in their house that’s for them, not just to increase its value," said Stephanie McMahon, Head of Research at Strutt & Parker. "For people looking to make use of their garden all year round, extending the interior space into the garden is highly desirable -whether in the form of new weather-proof buildings or taking key items from inside and adapting them for your garden.

"While swimming pools and hot tubs don’t represent good value or a sound investment, outside buildings like summer houses, pergolas and garden offices do. These can actually add value to your home, by boosting the floor space of a property and providing useful and versatile spaces that are huge selling features when done properly. These spaces aren’t like the conservatories of old, which basically just extended the inside living space. Summer houses and pergolas help people to create own little enclaves. These separate spaces allow people to go a bit crazy with their design as well as they’re not being used all the time.”

And she also pointed out that as people move to more flexible working, they’re spending more time in the home office.

"Now, a laptop at the dining table just doesn’t cut it for many," said Stephanie. "What they want is their own personal office space, mixing wifi with wildlife. Around a third of workers in rural areas do so from home, compared to just 12% in urban areas."