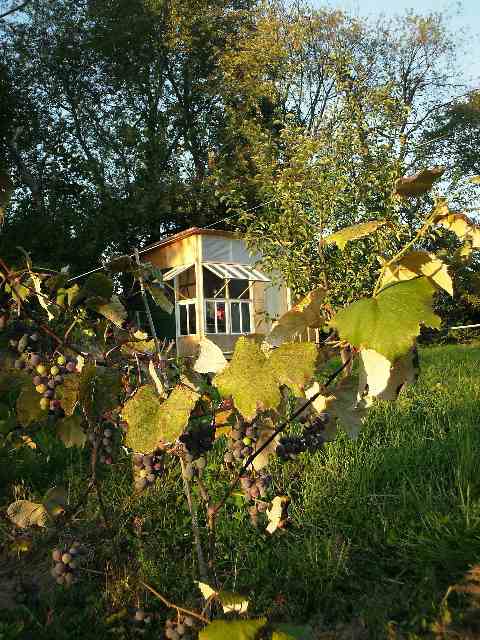 Poet and dramatist Cynthia Gallaher leads creative writing workshops in libraries, schools, spas and on cruises and writes for Shedworking about a writers' retreat combined with a farm she visited recently:

During my stay, I worked four hours each morning alongside other residents, hoeing strawberry rows, clearing weeds from underneath each apple tree and de-grubbing the lower trunks.

My "pod" was the cabin in the photo, a type of modular space featured in magazines such as Dwell and one that homeowners might put in their backyards or decks as a studio or office space. It had four open and close screened windows and a screen door on the "pod". The cabin was furnished with a duvet-covered futon (with extra blankets, comforter and pillows), a large finished wood desk and chair and a small cabinet where I stored candles and snacks.

On a typical day after morning farm duty, I grabbed lunch and a shower in the farm house and made my way back up the hill to an afternoon of writing in the pod which offers tremendous natural light to read and write. With my laptop charged the night before in the farmhouse, I was able to also use that when I was ready to capture or tweak previously handwritten poems.