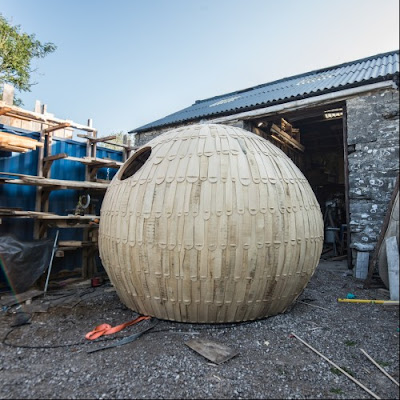 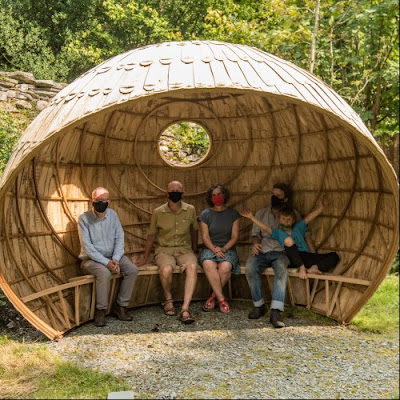 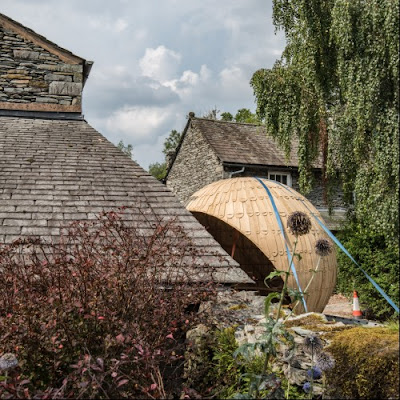 On a tour of Scotland in 1803, poet William Wordsworth and his sister Dorothy saw a building Dorothy described as a “hay-stack scooped out”. It was a simple circular, domed wooden hut, lined with ‘fog’, the Scots language term for moss.When they got back to their Dove Cottage home in the Lake District, they built their own version with marvellous views over the fells and it was here that they entertained and William wrote poetry, including his masterpiece The Prelude. Like the hut they had seen in Scotland, it was lined with moss and covered outside with heather with a long seat around the interior - William described it as like a "wren’s nest" and even wrote a little poem about it:

No whimsy of the purse is here,
No Pleasure-House forlorn;
Use, Comfort do this roof endear;
A tributary Shed to cheer
The little Cottage that is near,
To help it and adorn.

Bad news, the hut was demolished by a later owner, the writer Thomas de Quincey and there are no images of it surviving. Good news, in 2020 a replacement hut was built by designer Charlie Whinney (featured previously on Shedworking) in collaboration with natural world campaigners somewhere-nowhere out of Cumbrian oak at Dove Cottage along the same nest-like lines as the original (see images above). It looks tremendous and it's hoped that it will inspire new generations of writers. All the pandemic stuff has rather got in the way of a proposed tour of the moss hut in the region, but it's in situ at Dove Cottage and there are hopes that once things improve it can hit the road in 2021.

Wednesday’s posts are sponsored by Norwegian Log Buildings  - Log cabins and garden buildings for a better quality of life. Click here for more details.
Posted by Alex Johnson at 9:40 AM