How to build a timber-framed yurt 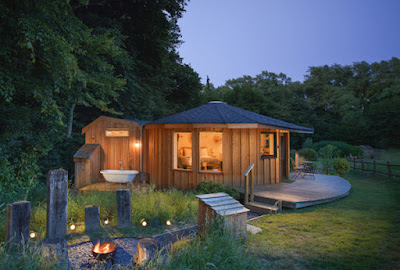 If you like yurts and fancy building your own, Rotunda Roundhouses has an interesting case study on their site following the progress of Paul Irish from Somerset-based The Yurt Retreat.

"His vision was for a Roundhouse he could design and build himself to the standards and aesthetics which would tie in with his existing style," says Gemma Roe, owner of Rotunda. His site already had four luxury 20ft yurts (not to mention a treehouse, luxury shepherds huts and boutique barn conversions), so Paul was after something that would fit well among that selection.

"Guided by his requirements, Rotunda designed and built the cassettes only, the structural framework, and provided him with the  walls and the roof panels which cleverly slot into their positions and bolt onto the structural steelwork at the dome aperture," explains Gemma. "As with all of our self-build kits, we always install the structure and leave it watertight prior to handing it over to the client on site. In this instance, we erected the walls and roof. We gave him the bolt-on service of  tiling the roof with the 100% recycled flexible eco-slates and then left Paul and his team to work their magic."

Click the link at the top of this post for more details and photos of the build. Excellent photo by Matthew Heritage.