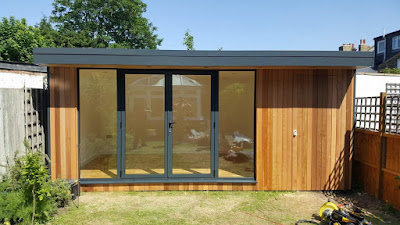 We're often asked how long it takes to get a garden office into your back garden. The answer is, usually, much quicker than you might think. Here's an example from eDEN Garden Rooms of what they did with a 5.6m x 3m multi-use space at a semi-detached home in Wimbledon (so all materials and tools were taken through a side access point which speeded things up a bit) with integrated store, double doors, floor-to-ceiling windows, and fire retardant concrete panels.

* March 13: Initial site visit. Two days later eDEN sent full drawings and a comprehensive quote through to the client for consideration.
* March 28: After a couple of rounds of tweaks and re-drafts, the client signed off on their preferred design, and a site build slot was booked and all materials ordered
* April 24: Team on-site, removing the earlier shed and clearing the site, ready for the construction team
* May: Build began in the first week of May and the two-week build allocation took eight days on-site for the garden room to be completed, and the keys handed over to the client

Tuesday posts are sponsored by Garden Spaces, suppliers of contemporary garden buildings, offices, gyms and studios, many of which do not require planning
Posted by Alex Johnson at 12:47 PM