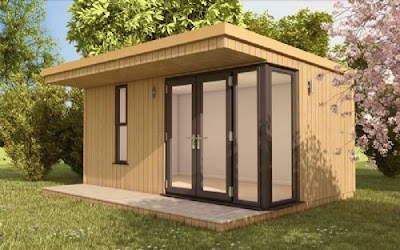 According to the latest report from AMA Research, the garden buildings market is set to to see steady growth rates of 2-3% per year until 2022. This follows on the back of the growth of the last five years which they say is down to "improving consumer confidence and spending as well as factors such as an improving housing market, increased levels of homeworking, trend for secondary residential garden buildings and growing popularity in 'outdoor living' and spending time in the garden."

It specifically predicts that the garden office market looks healthy and that while demand for log cabins has fallen in volume terms, that part of the sector has benefited from upgrading and price increases. Here's what they say:


The different sub-sectors vary in their maturity, with the sheds and greenhouse sector representing mature sectors compared to other less mature sectors such as garden rooms. The high household penetration of sheds and greenhouse means these sectors are more dependent on upgrading and replacement products. Whereas the lower penetration of other sectors such as garden rooms allows for higher levels of growth.

Overall, the AMA says prospects for the garden buildings market in the medium-term are optimistic (despite only rising 1% in 2017) but dependent on a range of issues such as housebuilding and  the effect of 'Brexit' negotiations.

Wednesday posts are sponsored by Eurodita, the leader in serving smart dealers
Posted by Alex Johnson at 11:17 AM