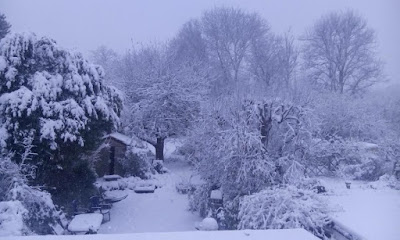 Following up yesterday's post on snowy sheds and garden offices, here above is the back garden of Helen Jenkins in St Albans, with other examples below...


A tricky commute to the office... pic.twitter.com/4bOuTHKb35

Deep night still as I walk to the writing shed. Stars sparkling like the ice on the grass, and an owl calling.

Tuesday posts are sponsored by Garden Spaces, suppliers of contemporary garden buildings, offices, gyms and studios, many of which do not require planning
Posted by thealexjohnson at 10:10 AM