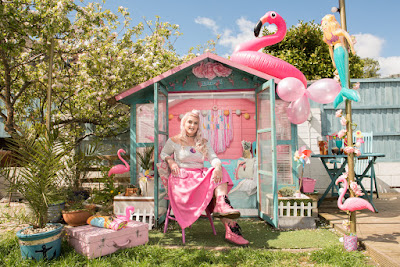 Just over half of shedowners in Britain now have wi-fi and electricity in their sheds compared with just a quarter who have a wheelbarrow, according to new research by Cuprinol which also indicates that 20 per cent of 'Millennial' shedworkers run a successful blog or business from their garden office.

The research by Cuprinol for National Shed Week (which they sponsor) found that nearly a third of people use their garden shed as a space for their hobby and seven per cent have now grown this into a small businesses. Overall, a fifth have created outdoor offices and half those questioned say they would work in the garden more often if they could - a third of Londoners admit they prefer to work from their shed than the kitchen table. Almost a half of people in the study say they feel more productive in their garden and can concentrate better, while almost a third believe they are more creative outside.

The results of the Shed of the Year competition will be screend on the Channel 4 series ‘Amazing Spaces Shed of the Year’ later this summer. Interestingly, this year has seen the highest number of 'shedrepreneurs' with 11 of the 32 finalists running a business, blog or not-for-profit organisation from the bottom of their garden.

Pictured above is shorlisted sheddie and YouTuber Mermaid Gossip who has created a colourful multipurpose workspace complete with wi-fi while below, founder of Team Unlimbited, Stephen, designs and builds 3D printed prosthetic hands and arms for children in need completely free in his spare time. His vision has helped children from around the world. 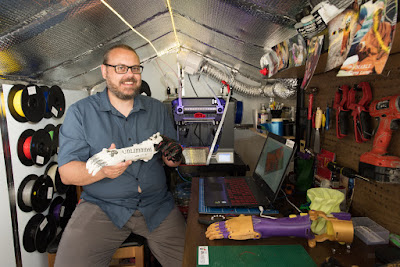 Marianne Shillingford, Creative Director at Cuprinol said: “It’s clear that the humble garden shed is no longer just a space to store garden tools, as people view it more as an extension of their home. Working outside can have a positive impact on your wellbeing and what’s wonderful is that anyone with a garden can design a space to inspire their creativity. It’s great to see how that year’s shortlist really showcases the extensive uses for a shed and how it can so perfectly enhance the way you live your life.” ---------------------------------------------------

Wednesday posts are sponsored by The Stable Company®, the UK's premier supplier of garden offices and garden rooms. Click here
Posted by thealexjohnson at 10:52 AM