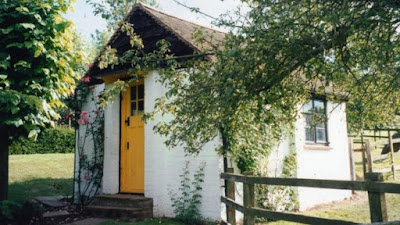 One of the most famous modern shedworkers Roald Dahl was inspired to build his own garden office (pictured top) to escape the distractions of family life following a trip to see Dylan Thomas's writing hut in Wales.

In an interview with the BBC (which you can see here) Dahl's widow Felicity said:


"He realised he had to have a space of his own in the garden away from the children and the noise and the general domesticity and he remembered that Dylan had felt the same. And so he went down to Wales to look at Dylan's writing hut and, like everybody, fell in love with it. He built it exactly to the same proportions as Dylan's hut, the same roof, one skin of brick. Of course Dylan's hut was a garage originally, whereas Roald had nothing, it was an empty space that he built on."

Monday posts are sponsored by garden2office, the Swedish garden office specialists. Click here for more details.
Posted by Alex Johnson at 9:46 AM