Shed of the Year 2016 shortlist 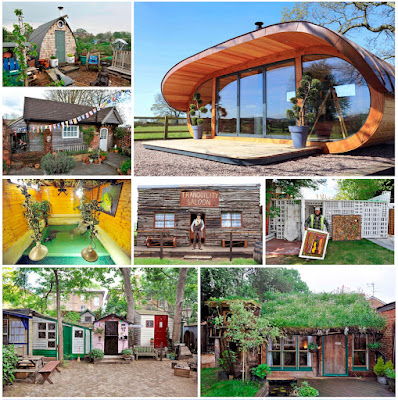 The shortlist of 32 microarchitectural gems for the annual Shed of the Year has been announced (see organiser Uncle Wilco's shedblog for full details) and voting is now open for the public to decide on the eight category winners. The finalists, whittled down from nearly 3,000 entrants, will be featured on the Channel 4 series ‘Amazing Spaces Shed of the Year’ later this summer. The winner will receive £1,000 courtesy of sponsors Cuprinol along with a plaque, £100 worth of Cuprinol products and, most importantly, a giant crown for their shed.

“Following a record breaking number of entries, the competition is just getting bigger and better each year," said friend of Shedworking Uncle Wilco. "It proves the nation is totally fanatical about garden sheds and the true British eccentricities are being championed. These 32 sheds include some of the best I have ever seen in the history of the competition, so deciding who will take out top honour as the Shed of the Year 2016 will be tough, I love them all.”

Sadly there is no specific 'garden office' category this year, but these are the shortlisted candidates for the 'workshop & studio' category which will be of particular interest to readers of Shedworking.

Star Wars – owned by Stephen Gee in Nottinghamshire
Following the recent launch of the latest edition in the Star Wars saga, this shed is inspired by Han Solo's Millenium Falcon, complete with flight deck and windows based on those seen on the silver screen.

Povera – owned by Michael Connell in Lewisham
Full of inspiration and creativity, the shed was mainly built from waste materials in such a way that it surrounds the trees in back garden. Approached in the same way as Michael does his art, it was an on-going project, the structure of which changed as he was inspired with different ideas.

Lawnside House – owned by John Barnard in Cheshire East
Built by hand, the Lawnside House resembles a decorative log cabin on the outside, with an eye-catching Lawnmower Museum inside featuring a unique collection of antique/vintage lawnmowers and gardening tools.

However Shedworking will be voting for:

Wednesday posts are sponsored by The Stable Company®, the UK's premier supplier of garden offices and garden rooms. Click here
Posted by Alex Johnson at 10:07 AM