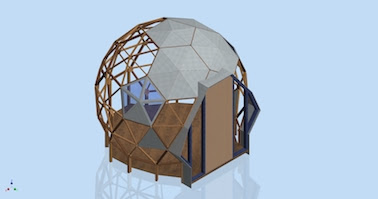 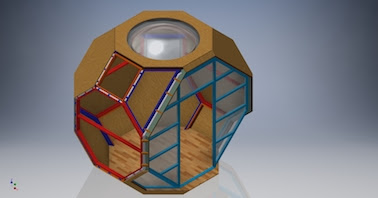 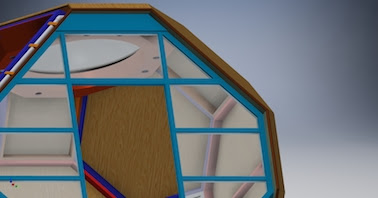 Way back in 2009 we featured Hugh Thomson's design for a domed garden office. Hugh recently got back in touch to let us know how his thinking on the design has changed (it's still in the planning stage):


Recently a renewed interest in Geodesics uncovered an interesting design of a habitable polyhedron by a Columbian architect named Manuel Villa. I was intrigued by this design and at the same time recognised a number of features that had potential for improvement. So I decided to develop my own version of this shed with improvements to the fascia around the main front frame and also to the integration of services within the structure itself.

The main polyhedral frames are held together by a series of wedged shaped blocks which double as a support for internal conduits that can be used for drainage or power supply. The fascia is a now a continuation of the roof surface with a 30mm dowel lining the edge to facilitate folding of the roof flashing to the edge of the window frame without compromising integrity of same.

The roof has a built in gutter following the perimeter of the roof dome which I have partially covered to minimize the amount of water collected, being mainly from the dome itself.

The other reason why I decided to look at this design was one of perceived cost. In the articles in the Architectural forums; where Manuels shed first appeared; a number of comments related to the perceived high cost of building something like this. Other than the dome, which can be replaced with something cheaper; the main elements of the design are quite simple timber construction with minimal complexity in the joints. I have substituted a plywood cover to the roof in lieu of planking, though admittedly planking would certainly look better internally. The roof finish could either be felting or shingles.

-
Monday posts are sponsored by garden2office, the Swedish garden office specialists. Click here for more details.
Posted by Alex Johnson at 9:42 AM