Beyond Live/Work: The Architecture of Home-Based Work 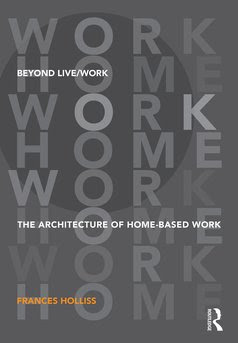 There are plenty of attractive books about sheds, garden offices and colourful introductions to working at home, but at last there is a book which is not only well illustrated but also tackles the subject intelligently and comprehensively while still being readable.

In fact it's so thorough that it's hard to do justice to the book in a single blog post and Frances Holliss - an architect and Emeritus reader in architecture at London Metropolitan University - will be writing a guest post for Shedworking next month on the subject. But in brief, Beyond Live/Work looks at the history of people working at home (not just in the UK, there's particularly good coverage of Japan for example too) and the types of location in which they do it, including garden offices. There are also many interviews with homeworkers to emphasise the human element in homeworking.

There is plenty here to get your teeth into, from cottage factories (of which I was shamefacedly ignorant), a fascinating list of homeworking occupations made by Victorian work researcher Charles Booth (are there many gold-leaf beaters still shedworking today?), and suggestions for the future (from courtyard workhomes to 'flirting benches' so homeworkers get a chance for romance...).

But it's also a book with several messages, not least that the 20th century idea of 'going to work' is likely to look like a blip in the history of working as homeworking continues to rise. "This represents a radical change in our society," she writes. "It has huge implicains for how we inhabit, think about and regulate our homes, workplaces, and cities."

Frances mentions how many of the people interviewed for the book are the backbones of their community. "All are visible, well-known members of it and generally work long hours in some form of public service." She also strongly argues the case for the eco-friendly nature of homeworking and against the nightmare of commuting.

Wednesday posts are sponsored by The Stable Company®, the UK's premier supplier of garden offices and garden rooms. Click here
Posted by Alex Johnson at 9:28 AM