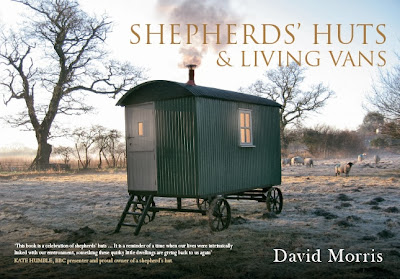 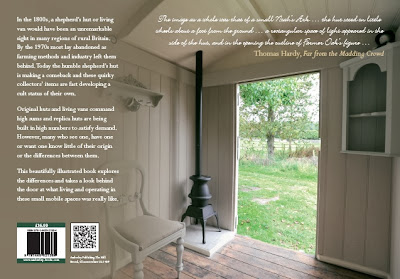 I've not seen a fully copy of this yet but the few pages I've seen look tremendous and I hope to bring you a review next week. David was in Bath last week launching the book and on Saturday he'll be at the Castle Garden Centre, Sherborne, Dorset, with a Plankbridge hut. In the meantime, he has been kind enough to write about his hut experiences for Shedworking's readers:


I guess my association with sheds goes back a long way. Growing up in Somerset on what was the remains of my great uncle's farm (then owned by my mother and father) we had sheds everywhere (bliss). Thanks to my parents' encouraging nature I was allowed to convert an old stable building into a very rudimentary sort of museum shed, collecting all kinds of rural bygones and stuff – effectively I had a shed and a rough museum at the age of 12 (how lucky we were).

The shepherds huts came about 10 years ago. My interest in rural history has never left me and my wife came across an abandoned hut on a Dorset track way. Not any old hut, this was the last hut used at Waterston Manor, and as a Dorset Tour Guide, she instantly recognised the appeal and importance of the hut. We rescued it back to our orchard and then carefully restored it.

Restoration. Now there is an interesting word. I am passionate about keeping as much original material as possible when something is being worked on or repaired. Quite often an object is stripped, polished, painted and re-adorned with countless new components and called a restoration? Rebuilt, refinished, repainted maybe, but not always what I would like to see in a restoration. The Hardy hut as we affectionately call it (Hardy probably never saw the hut, but you know how these things attract a name) has been very sympathetically restored keeping as much original material as possible.

My museum conservation skills have brought a lot of techniques and modern potions into play on the hut and enabled us to preserve original tin and timber that many people would probably have discarded thinking it was not saveable. You can’t save everything, but you can save more than you might think, for a lot longer than you would think, and I think that is important.

Hut two came a couple of years later, again found abandoned in a Dorset farm yard. I suppose this is where the book idea came from. I was beginning to write more in my museum curatorial position and was also reading more and more articles on shepherds’ huts that were not accurate. There was also a common trend beginning to form that everything with a curved tin roof and a wheel nailed to each corner was ‘a shepherds’ hut’. This was becoming frustrating and several people (notably my wife and several close friend rural life museum curators) encouraged me to get on and write the book, so I guess it all fell out of that.

I had been collecting hut related stuff for some years, had some background knowledge from my farming days, knew and had met people that had used shepherds huts, so I suppose I had a head start. I also know, and have access to, a lot or archives and collections that has undoubtedly helped find a lot of interesting early material. The book (I hope) gives and insight into shepherds’ huts and also clarifies the difference between these and other similar huts (road roller huts, steam threshing crew huts, etc) describing not only how they differ in design, but also how they were used by their occupants on a daily basis.

We all enjoy our huts today (mostly recreationally) but I think it is important not to forget that these were once people's real workplaces and often operating in very tough conditions on the knife edge of financial success or failure. I think some people may also be fascinated to see some of the very early references to shepherds huts that I have been able to research, particularly the illuminated manuscript images from the 1400s.