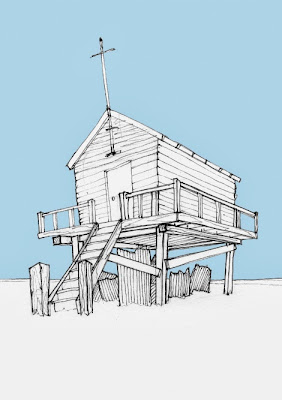 Here's an intriguing film project worthy of your support on indiegogo


Fireworks is a charming indie comedy about a teenage girl, Kat, who runs away from home to find her uncle Gillies, who she has secretly discovered is her real dad. But Gillies, played by the fantastic Ewen Bremner, turns out to have bipolar disorder. Without fully understanding this, Kat hatches a plan for them to make a homemade firework, with Gillies' medication as the essential ingredient.

It also features a rather charming hut, designed by Euan Gray. Here's what the film's director Hannah Robibinson says:


"Not only is Euan creating a unique, cinematic, charming hideaway hut for our film, he has also created this stunning set of hut-inspired artworks to get hut-lovers in the mood for the finished design. The drawings were created by Euan to give a sense of the tone and style of the film, and of the hut itself, and he is generously offering them as perks for contributors to our crowd-funding campaign. For a contribution of £60 or more, you can have this set of 4 prints. The perfect addition to your own hideaway, or the perfect Christmas gift for anyone who longs for a hut of their own."

Tuesday posts are sponsored by Garden Spaces, suppliers of contemporary garden buildings, offices, gyms and studios, many of which do not require planning
Posted by Alex Johnson at 11:56 AM