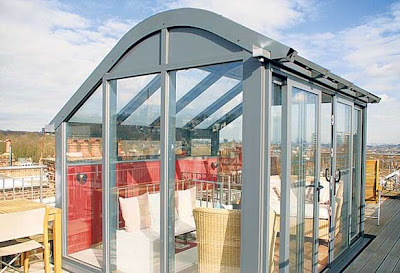 According to The Independent, "space-savvy homeowners are changing the face of the urban extension" by building on top of houses rather than merely extending them sideways. Here's a snippet:

"Building up is a way to create new rooms, especially bedrooms, (the most sought-after addition, according to the survey by RICS), and few can deny that there's something uplifting and even transcendent about the rooftop view; an eyrie from where the world can be safely observed."

Thursday posts are sponsored by Atelier garden studios which are sustainable, stylish, flexible, functional and future proofed
Posted by Alex Johnson at 12:05 PM