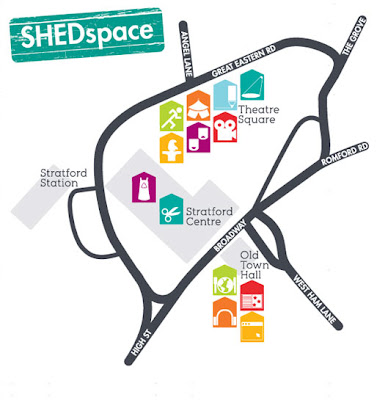 Thirteen specially commissioned cultural sheds are on show in Stratford today. SHEDspace is a new one day festival running from 12pm to 6pm today with shed installations throughout the town centre, each presenting an activity which ranges from film to fashion, digital art to theatre, circus and dance.The majority of the Sheds have been created by local artists although there are one or two specially invited guests including cellist and digital artist Peter Gregson choreographer Rosie Whitney Fish and Zimbabwean-born artist Thurle Wright. The Festival is presented by Stratford Rising, a consortium of organisations based in Stratford who are working together to raise the profile and sing the praises of culture in Stratford.

Mark Prescott ShedSPACE curator said: "Sheds seem to be a very British concept. So many people use them as places of reflection or an opportunity to pursue a hobby, interest or obsession. The activities presented in the festival expand or play with that central idea. In addition the Sheds have been positioned in such a way as to draw audiences on a journey around Stratford itself."

Here's what you can enjoy

• Fashion and dance
Visitors to Stratford Shopping Centre will be able to take part in a swap shop and fashion project, watching as two stylists go head-to-head in a fashion challenge. Choreographer Rosie Whitney Fish who has worked with London Fashion Week, Vidal Sasson and Wella, will be creating the ultimate dance swish together with a series of pop-up performances of fashion inspired dance.

• Theatre and performance art
Theatre Venture’s Miniscule Olympics starts with a slo-mo marathon and proceeds with a series of quirky Olympic-inspired activities. Stratford Circus have created their very own circus shed complete with tightrope and acrobatics. Anthems at the prize winning ceremony are provided by the New London Orchestra. Gasp have turned their shed into a beautiful Victorian Toy Theatre and are presenting two shows Ali Baba and the 40 Thieves and Theatre Royal begin the process of throwing their stage open to the public in 2012 with an Open Stage Shed

• Art and Design
Artist Thurle Wright creates a participative opportunity to create a public art project using her Shed as skeleton for audiences to build and write stories using cardboad boxes. There is scope for more than a 1,000 boxes to be painted and decorated and from a unique public sculpture created during the day.

• Digital
Visitors to Stratford’s Old Town Hall Square will also be able to give their warts and all views on the Olympics to journalists and bloggers from A New Direction (explanation of A New Direction), who will be recording the responses as part of a live blog stream from the festival. Cellist and Digital Media Artist Peter Gregson is inviting audiences to collaborate with him in an attempt to capture a soundscape of the festival.

• Miscellaneous
Stratford Picture House have turned their shed into a ‘cinema karaoke’ while also offering a live musical accompaniment to Buster Keaton’s The General. Hungry audiences can eat their way across 5 continents courtesy of Northern Imagination who have been inspired by the rising London trend in street food. Discover Children’s Centre have designed a beautiful shed full of escaping stories where children have to help Joe the Story Keeper to create new stories so that the shed does not empty.
---------------------------------------------------------------