Can sheds save the NHS? 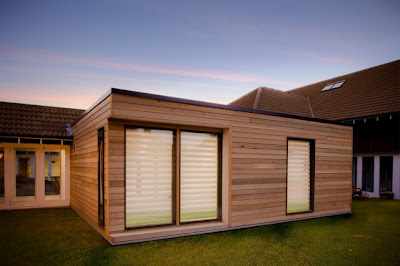 The magazine reports that Maude said hospital buildings could be built “as sheds around people and equipment that can be reconfigured very quickly in 10 or 20 years’ time when needs change. We need to build in flexibility. We need to have a shell that’s capable of being reconfigured. At the moment, we’re building in obsolescence.”

Of course those that following Shedworking know that this process is already underway and that garden office buildings are increasingly being used by hospitals around the country. One example, pictured above, is by in.it.studios, a garden room extension for St Oswalds Hospice in Newcastle which is a Rehabilitation Room: it's 5.9m x 7.6m, cedar clad and as in.it.studios say, "the timber construction distinguishes itself from the brick built hospice with a contemporary aesthetic yet retains an appearance sympathetic to its environment".
Thanks to Lloyd Alter for the alert
Posted by Alex Johnson at 8:22 AM