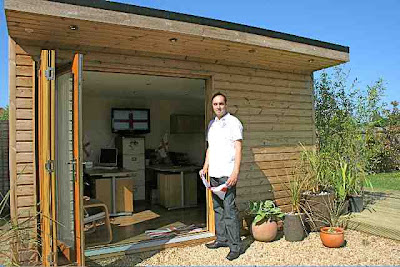 With the world cup almost upon us, Jason Young of Open Construction Services muses on the relationship between garden offices and football's biggest competition:


With the greatest football tournament in the world almost upon us I’m even more thrilled to be a shedworker than usual. Unlike previous years when my ability to watch games was severely compromised not only by the absence of a television but my employer’s unwillingness to indulge my passion for the beautiful game, this world cup will be different.

Running my business from a garden office I designed and built in my back garden, subtle modifications have already been made in preparation for kick off. George flags provide patriotic decoration and the installation of a flat screen television means I can enjoy more football than ever before. 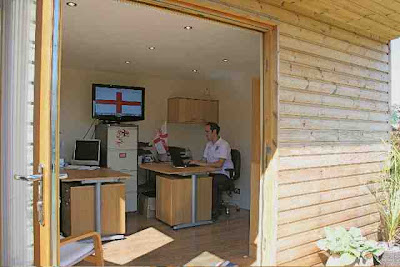 Of course being a new business means productivity cannot be allowed to slip and even during the World Cup the work still needs to get done. But like thousands of homeworkers already appreciate, shedworking allows me the flexibility to fit work around my hobbies and interests.

The benefits of flexible working are obvious, Brendon Barber General Secretary of the TUC has commented: “Whether its about watching great sporting events like the World Cup or collecting children from school, allowing people more flexibility makes them happier and, ultimately, more productive for their employers.”

Those working in more traditional environments are not so lucky - according to a report by Kellogg’s just one in ten UK employees said that they would be allowed to take time off during the tournament and up to 15% of employees are expected to take ‘sickies’ to ensure they can follow their team’s progress.

Whilst England’s success in the World Cup is far from guaranteed, flexible working in my home office is sure to be great for me and great for the business - and who knows, if the team has a good run the water cooler may well have to swapped for a beer fridge. Good luck England.

Tuesday posts are sponsored by The Home Office Company, manufacturers of unique garden rooms since 1998. Now in 10 exciting new colours. Click here for more details.
Posted by Alex Johnson at 10:45 AM