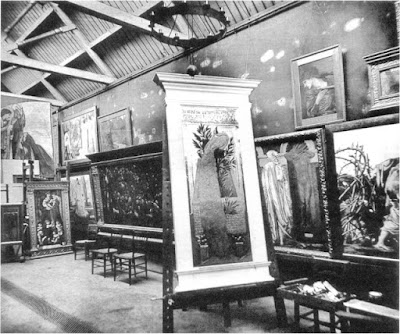 Pre-Raphaelite 19th century painter and stained glass specialist Sir Edward Coley Burne-Jones was also a shedworker. Granted, his garden studio at his house in Fulham, London, was pretty spacious as his grand-daughter novelist Angela Thirkell remembers in her memoir 'Three Houses' (the painting she refers to was Burne-Jones magnum opus, The Last Sleep of Arthur in Avalon):


"It was a little alarming to us: the red-tiled entrance and steps which led down to the furnace-room where we were never allowed to go and where anything, one felt, might live; the iron grills in the floor to let in the warm air for winter days; the tall narrow slit in the outer wall through which the larger finished pictures were passed. Sometimes those pictures went to exhibitions, but more often straight to the friend or patron (in the very best sense of the word) who had commissioned them and was content to wait for years if need be for the perfect expression of the artist's mind.

"In this studio there was a very high set of steps with a higher and lower platform on which the artist worked at the upper portions of his pictures. I remember sitting on these steps, my head wrapped in a many-colored piece of silk and bound with a coronet, while my grandfather made studies of crown and drapery for one of the mourning queens in the great unfinished picture of Arthur in Avalon"