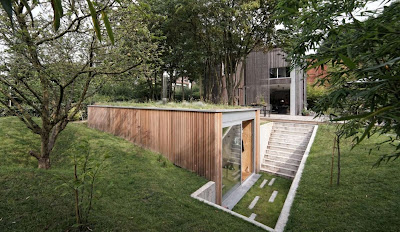 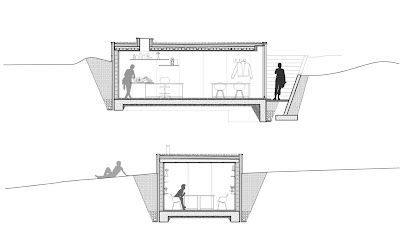 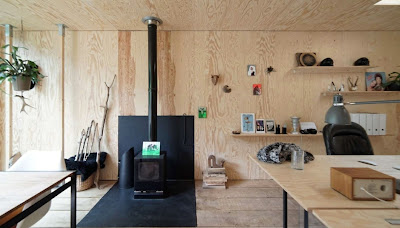 The idea of an underground shedworking location has always appealed to the Shedworking HQ staff so we were particularly taken by this lovely construction by Belgian architects L'Escaut for graphic designer Nathalie who lives in Uccle. Two thirds of the garden office are underground and there is also a pleasing 'English type' courtyard as well as roughly sawn oak ceiling and flooring elements which, they say, "wrap everything up into a warm cocoon". Here's what the designers say about it:


"Seen from the house, the workshop is not anything else than a small part of the garden that would have been extruded, with a green roof snatched from the ground grass. The plants constituting the latter were chosen precisely in this sense among some varieties of herbaceous and grasses to resemble as closely as possible to the prairie grass and thus reinforce this perception of nature. The roof whose level is uncommonly lower than eye level, becomes a true fifth façade, as the real function is also betrayed by the presence of a hidden glass opening among the grasses.

Tuesday posts are sponsored by Garden Spaces, suppliers of contemporary garden buildings, offices, gyms and studios, many of which do not require planning
Posted by Alex Johnson at 9:20 AM