WALDEN R A F T An installation by Elise Morin and Florent Albinet from EM on Vimeo.

As the father of Shedworking, Henry David 'Walden' Thoreau has a special place in all shedworkers' hearts. Here is an intriguing take on his work on Walden Pond where he build his cabin in 1845, a semi-transparent "dynamic and contemplative experience" artwork by Elise Morin and Florent Albinet which provides the public with a space for reflection.It's made from wood and acrylic glass.

Here's how the designers describe it...


"The esthetics of the structure which oppose the Romantic fusion of humanity into the environment are emphasized not only by the choice of transparency but also that of flotation. From the interior or the exterior, the material’s occasional transparency offers a ensemble of unique perspectives which dissolve the perception of “wilderness” and “tameness” underlying the fundamental misunderstanding placing us in opposition with Nature. Thus, one does not inhabit this cabin; it serves to induce a specific relationship to the territory surrounding it. “Walden Raft” is a non-space whose position is unceasingly readjusted. Neither public property, nor private, nor entirely outside the world, nor entirely interiorized, it is an intermediate space, a lookout post where one can see while accepting to be seen."


If you're in the Auvergne this summer, you can see it for yourself until September 27 at Lac de Gayme, Picherande. 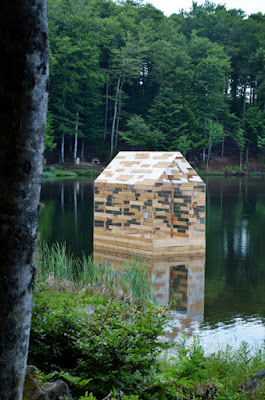 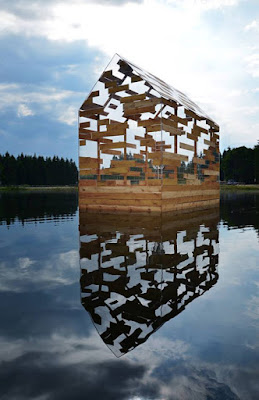